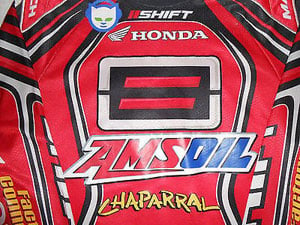 August 21, 2005 - AMSOIL CHAPARRAL HONDA TEAM continues to push for consistency and solid results as outdoor season nears the end! With two more outdoor nationals remaining, the professional motocross community is looking for the light at the end of the tunnel. The race season starts in December 2004 and concludes in September 2005. All the while, the riders, rigs, supports crews, and event staff are for the most part on the road and working hard over that grueling ten-month period. With an occasional weekend off over the course of the season, the athletes must maintain their competitive focus while nursing injuries, maintaining fitness levels, and juggling personal responsibilities through the distractions and inconvenience of the traveling road show.

When the season ends, there is no time to sit on the couch and enjoy football games because the teams almost immediately begin testing for the next season of racing. If anyone of the athletes on the Amsoil, Chaparral, Honda team knows the trials and tribulations of a long season of racing it is Kevin Windham for sure. The seasoned Windham rolled into Binghamton happy to learn there would be some additional excitement and challenge thrown into the mix coming in the name of James "Bubba" Stewart. James was hoping to make a come back of sorts and help Windham out in an effort to derail the rock solid Ricky Carmichael. Bubba definitely added some excitement, but as the sun set on this Sunday of racing the results were the same. Kevin finished with another 2-2 result in both motos. Once again, Windham showed his cagy veteran status by pulling two great starts in his motos while getting himself in the position to contend for a win. Kevin worked hard and pushed the pace, but he could not find a way to get his Honda CRF450R to the top spot on the podium. However, with yet another impressive second place overall finish, KDUB comfortably holds on to second place overall in the 250 AMA Motocross Championship standings. If there is a rider in motocross following the footsteps of the legendary Mike "The Rock" LaRocco, it could be Josh Grant. Josh has become so consistent this outdoor season his results are starting to parallel the expectation and precedent set by teammate LaRocco. Josh once again put together two very strong motos, despite an early crash in the first moto, at the Broome-Tioga Sports Center finishing sixth and fifth respectively. Josh showed great speed and one can only wonder what would have been without a first moto tumble.

With "The Rock" like performance Josh, sitting in fourth overall, is still within striking distance of a top three overall finish in the 125-point standings. Great starts are synonymous with great results. Billy Laninovich had his sights set high this weekend hoping to once again join Josh Grant up front. Billy was feeling good after finishing sixth at Millville, and knew he could improve on the result. But his starts at Binghamton were not podium worthy, so Laninovich was forced to ride with and through the congested pack. Laninovich put in a solid effort and posted a twentieth and fifteenth place finishes in his motos. Billy lost one spot slipping to 14th in the overall 125-point standings. Coming off a top ten result last weekend, Tommy Hahn was looking for another chance to contend for a podium position. Like teammate Laninovich, Hahn did not get the snap off the line he needed to race up front early on. So pushing hard through the dusty pack, Tommy was testing the limits of his ability and Honda CRF250R when he crashed hard about half way through the first moto. Dazed and confused, Tommy came back to the pits to assess the damage and regroup for the second moto. Bruised and sore, the true competitor in Tommy pushed him to the starting line for moto two, but several laps into the race Hahn was forced to withdraw as he was still feeling the effects from his crash in the first moto. Despite the difficult day, Hahn only lost one place in the overall point standings now sitting 15th overall. Joaquim Rodriques must feel like he is in the Twilight Zone. Finding himself in a similar predicament last weekend, JROD went down in the first corner. After starting last, he worked his way through the pack to sixteenth - ahead of teammates Laninovich and Hahn. Joaquim had a much better start in the second moto, but then struggled to maintain his position suffering from the strong super human effort in the first moto. So with a nineteenth place finish in the second moto, Rodriques earned nineteenth position overall for the day while remaining in 24th overall in the 125 standings.