Built by fanatics, For Fanatics

Since day one, we've spearheaded the car audio revolution. Nothing's changed. Rockford Fosgate® is still the global leader in audio innovation, design and engineering, delivering an experience of passion through sound in a way the world has never felt before.

Since day one, we've spearheaded the car audio revolution. Nothing's changed. Rockford Fosgate® is still the global leader in audio innovation, design and engineering, delivering an experience of passion through sound in a way the world has never felt.

Passion, power and performance is the basis for our original community mantra "Car Audio for Fanatics." Rockford fans demand the best, and that's what we deliver. It's the Rockford Fosgate® commitment built into every product we produce.

Your passion is our purpose. We build the best audio systems for your lifestyle. Sound built for speed. Whether it's automobiles, motorcycles, boats or off-road vehicles, we like to say if it has wheels or floats, we make a stereo for it. Purpose Built.

We have been a dealer for over 10 years. Great product, great reliability, great company.

In 1973, Jim Fosgate made a startling discovery while working in his garage in Arizona, USA. Mr. Fosgate realized that music and the human ear have different audio properties. The human ear didn’t have the same sonic “curve” or signature, which made lower frequencies sound different at low volumes than the actual music. Mr. Fosgate invented a solution, the Frequency Energizer, which would later become the patented Punch EQ.  The Punch EQ adds a Bass Boost up to +18 dB at 45 Hz and a Treble Boost hinge filter active from 1 kHz to 20 kHz with up to +12 dB at 20 kHz resulting in better sound reproduction for your ears.

In other words, that’s a lot of control! Your entire driving environment - car windows, road noise and your annoying life mate that never stops yappin' - all benefit from the musical energy that Punch EQ injects back into the system. The sound of THE PUNCH gave Mr. Fosgate’s first customers the impact that their music needed. Now that same PUNCH is the sound of Rockford Fosgate® and you can hear it in everything we make.

1982 brought a punch from Rockford Fosgate®, the Punch Power 360.6 amplifier. The sleek black design with ground aluminum heat sink fins pioneered the Black and Grind style of amplifiers. Although the Power 360.6 was rated at 60 Watts x 6 into 2-Ohms, Dynamic Power output is 570 Watts! The Punch Power 360.6 – the all-in-one amplifier – that plays all your music.

Rockford Fosgate® brought massive power output to small stealth installations with the Punch PBR300X4 300 Watt multi-channel amplifier, featuring the patented Boosted Rail Technology, which became the cornerstone for the complete line of Rockford compact amplifiers that exists today. Efficient and compact, the PBR300X4 delivers big sound with power to motorcycles, RVs, boats and any situation where electricity is limited.

In 2012, we launched the T5652-S 2-way component speaker system for those who are serious about their music. The T5 was designed with the best quality features and components that music aficionados love, delivering a concert experience to your vehicle. The TF featured a Liquid Crystal Polymer (LCP) cone for maximum durability and VAST technology that increased cone size by 25 percent, resulting in more output and extended frequency reproduction.

In 2013, Rockford Fosgate® unveiled the Rosetta Stone for modern, complex audio systems in the 3Sixty.3. The ultimate car audio processor, the 3Sixty.3 features 8-channels of interactive signal processing that streamlined the audio signal from your stereo, sending it seamlessly to your amp and speakers in clear DSP surround sound, eliminating the cluster of annoying relays, adapters, and cables.

Our 2015 T1 Slim fit woofer was created with a revolutionary design placing it in a class all its own in the speaker industry. Rockford engineers set out to create a slim woofer that could perform like a full depth woofer. They hit the bullseye by creating and patenting two completely new technologies, the Encapsulated Voice Coil Coupling technology and the Split Yoke Motor Structure, delivering better sound for the T1 than its full-size counterpart.

The T3 19-inch subwoofer is the resulting triumph of over five years of R&D by the Rockford Fosgate® product development team. The T3 is the gold standard for Rockford woofers. The best-in-class woofer uses cutting edge design and advanced technology in engineering to create what can only be described as a “Super Woofer”. The T3 has an astounding 34 mm of excursion with 3000-watts RMS/6000-watts Peak power handling, making it an un-rivaled high power, high output Sound Pressure Level leader.

In 2017, Rockford Fosgate launched a 1,000 Watt compact chassis amplifier, and produces music the way it was meant to be heard. This amp kicks bass! Its Class A/D design combines high-fidelity output with class D power efficiency, delivering a superior ground shaking sound quality that’s second to none. Our proprietary Constant Power circuitry provides up to 25 percent more ear-drum rattling power output across all speakers, giving you more volume when you want to crank it up. 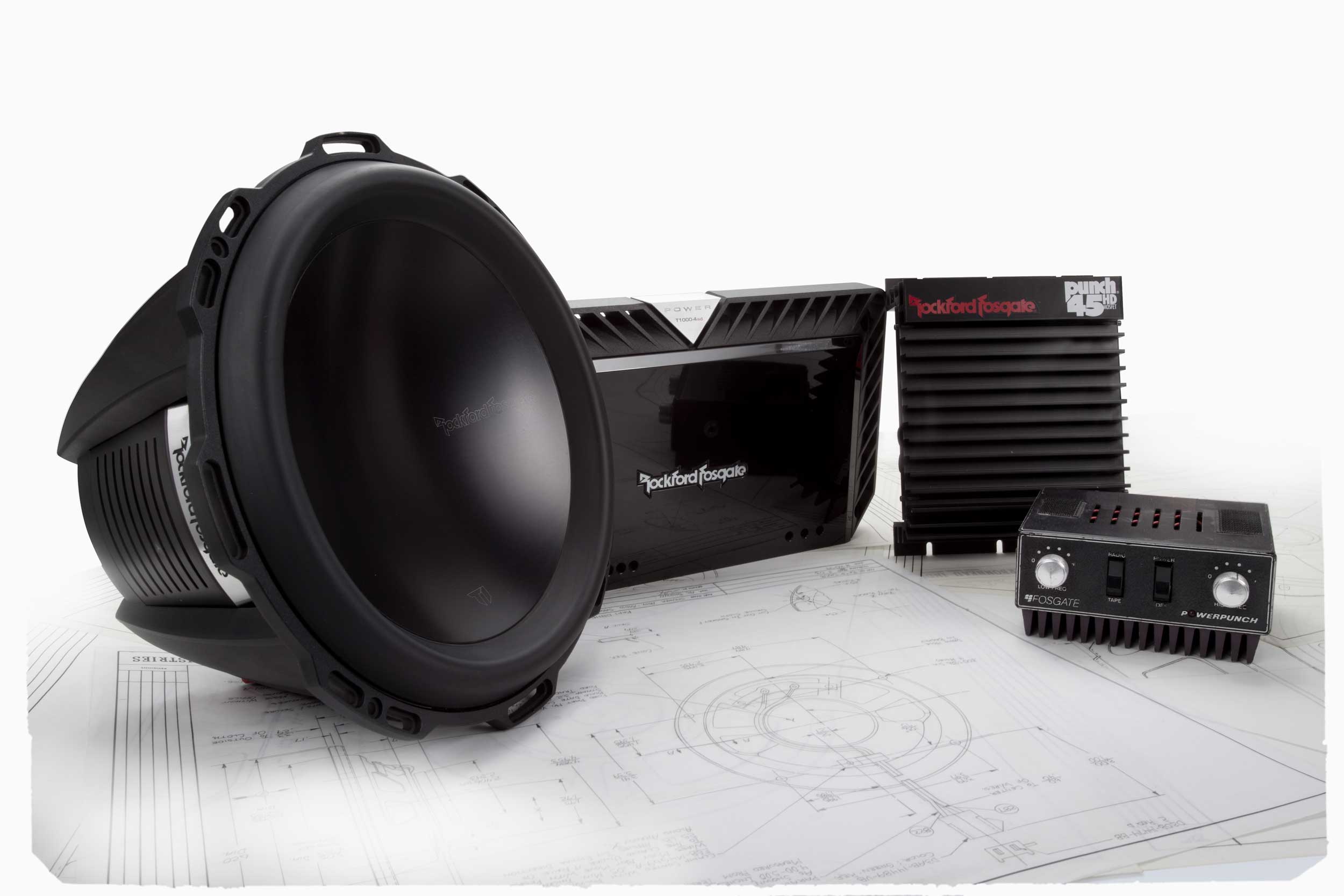 Rockford Fosgate® is POWER. For those who don’t eat, drink and sleep audio, this may seem a little terrifying. Why would someone want thousands of watts of Rockford Fosgate® power in an amplifier that’s bigger than most cars are wide? Because sometimes, too much power is perfect!

Rockford Fosgate® is built for the future. We implement the most state-of-the-art technology in the audio world. Best of all, our entire line of products…amps, subwoofers, speakers, processors, and source units are designed and engineered in Tempe, AZ, USA!

Rockford Fosgate® isn’t just about technology. We’re about creating human experiences in sound. Technology and audio science merge in brilliant design of circuitry and components that enable you to enjoy impactful and passionate music. Just as the artists intended. Jim Fosgate founded Rockford with a passion for music, and he’s still pursuing his dream. Mr. Fosgate won an Emmy® Award for his ingenuity in developing surround sound technology. You could say his entire career has been defined by music and technology.