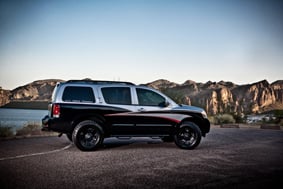 After weeks of fabrication, and installation, Rockford Fosgate chose April 19, 2008 for the “Rock-MADA”, a collaboration demo vehicle with Nissan, to make its maiden voyage. The new demo vehicle featuring (6) T1 15” subwoofers, (3) POWER T1500-1bd amplifiers, (2) T600-4 amplifiers and (4) sets of T162S component speakers, delivers enough bass to measure on the Richter scale! The road worthy, rep friendly, crowd pleaser acted as a carnival ride at this, it’s first event, The Ultimate boarder…blowing away the spectators and competitors with its aggressive sonic signature.

“Every time we take a new project on the road it’s evident, more than ever, that people have no idea what’s possible! It’s an awesome experience to sit a 17 year old in our demo vehicles and watch them light up! You can see it on their faces…you’ve given them their first taste…the taste of bass,” stated Jake Braaten, Director of the Rockford Fosgate brand.

Ultimate Boarder, a 3-stage action sports triathlon focused on surfing, snowboarding and skateboarding and proved to be a perfect stage for Rockford Fosgate. RF not only activated at the events skateboard final but also awarded full Rockford Fosgate sound systems to the Ultimate Boarders overall top brass…delivering first place winner Aaron Astorga the ultimate RF set-up for his ride.

“It’s amazing to think that these guys “tore” it up in 3 separate events over the period of a week! My hats off to all the guys who stepped up and threw it down…especially Aaron Astorga, Todd Richards and Kristian Phillip who walked away with the gold, silver and bronze metals. These guys deserve all the accolades and especially the RF gear…they truly embody the RF fanatical lifestyle,” preached Zach Luke, Rockford Fosgate’s Director of Marketing.

¬Rockford Fosgate is a division of Rockford Corporation in Tempe, Ariz., a publicly traded company under the NASDAQ stock symbol ROFO. Company websites can be viewed at rockfordfosgate.com and rockfordcorp.com